The United States on Wednesday formally reestablished diplomatic relations with Cuba after 50 years, saying the two countries will reopen their embassies later this month. However, some politicians, including presidential candidates and older Cuban exiles, disagree with the thaw in relations.

Speaking from the White House Rose Garden, President Barack Obama called it “a historic step forward in our efforts to normalize relations with the Cuban government and people, and begin a new chapter with our neighbors in the Americas. … You don’t have to be imprisoned by the past. If something isn’t working, we can and will change.” 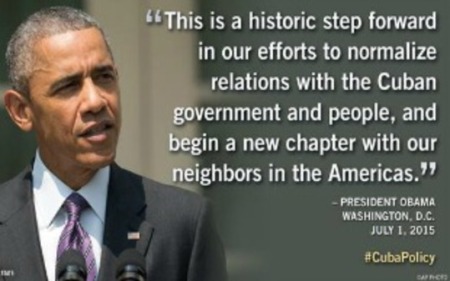 Although recent polls have shown the majority of Americans support opening relations with Cuba, critics say the United States has made too many concessions with Cuba. Among politicians and presidential candidates, criticism came down along party lines, and mostly a repudiation of Obama and his legacy.

“The real test of the Obama administration’s rapprochement with the Castro regime in Cuba is not whether President Obama’s legacy is burnished with dubious diplomatic achievements and photo-ops, but whether improved relations between Havana and Washington advance the cause of human rights and freedom for the Cuban people,” said presidential candidate and former Florida Gov. Jeb Bush.

“This will do nothing to help the Cuban people and is just another trivial attempt for President Obama to go legacy shopping,” said U.S. Rep. Ileana Ros-Lehtinen, R-Fla. in a statement. “The State Department has failed to forcibly condemn the increase of repression on the island now that the Castro regime feels emboldened to continue its attacks against the Cuban people.”

Average Cuban-Americans, meanwhile, had a mixed reaction — not along political lines necessarily, but rather generational lines. Members of the older generation, including many who emigrated from Cuba, are against reestablishing diplomatic ties, while the younger generation supports the move.

While the opening of embassies marks a major milestone in the thaw between the Unites States and Cuba, significant issues remain. Critics say Cuba has not done enough to improve its human rights record, still has very tight restrictions on freedom of speech and expression and uses threats and intimidation to discourage government critics.

“Detention is often used preemptively to prevent individuals from participating in peaceful marches or meetings to discuss politics,” according to Human Rights Watch’s 2015 report on Cuba. “Only a very small fraction of Cubans are able to read independent websites and blogs because of the high cost of, and limited access to, the Internet.”

The opening of embassies and reestablishing ties between the two countries is only the beginning. Among the major issues still to be dealt with are the embargo, compensation for properties taken from U.S. citizens after the revolution, the U.S. base at Guantanamo, migration policy and the return of U.S. criminals who have been given safe harbor in Cuba.

“I intend to oppose the confirmation of an Ambassador to Cuba until these issues are addressed.” said Sen. Marco Rubio, R-Fla., also a presidential candidate.

Florida’s other U.S. Senator, Bill Nelson, D-Fla., believes restarting relations is actually a benefit. “I still distrust Castro, but we have to get that regime to open up, stop human rights abuses, and give the Cuban people their basic freedoms,” he said. “I think reopening the embassies is a necessary step in the long process toward achieving that goal.”

Obama and Cuban leader Raúl Castro jointly announced on Dec. 17 that the two countries planned to work toward normalization.

The United States broke off relations with Cuba in January 1961, following a deteriorating relationship in the aftermath of the 1959 Cuban revolution.

During his announcement on Wednesday, Obama again called on Congress to take steps to lift the embargo: “That’s what this is about: a choice between the future and the past. Americans and Cubans alike are ready to move forward. I believe it’s time for Congress to do the same.”