Hypocrisy among conservative politicians has run high since the Orlando massacre on June 12, and on Tuesday it may reach its boiling point. Just one week after repeatedly touting himself as the real friend of the LGBT community, Trump is set to meet with the leaders of some of the most anti-LGBT hate groups in the country. 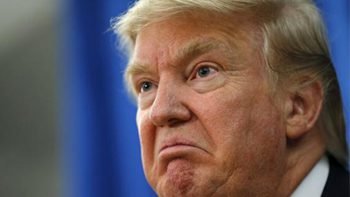 The private event, “A Conversation About America’s Future with Donald Trump and Ben Carson,” is being held in New York City and has been described by the Huffington Post as “a private meeting with over 400 of the most bigoted, most homophobic and most influential anti-LGBT advocates in the United States from Family Research Council’s Tony Perkins to James Dobson, founder of the Focus on the Family the bedrock of the religious right, which has been a prominent part of the base of the Republican Party for decades.”

As of this writing, more than 700 evangelical leaders reportedly are attending the closed-door event presented by United in Purpose, a right-wing Christian get-out-the-vote group, and My Faith Votes, whose honorary chairman is former GOP presidential candidate Dr. Ben Carson.

Carson, who has been working with the Trump campaign and is playing a major role in the conference, is the same person who months back compared homosexuality to bestiality and pedophilia. He also explained that being gay is a choice “because a lot of people who go into prison go into prison straight and when they come out, they’re gay.”

Among the event organizers, the Family Research Council is considered a hate group by the Southern Poverty Law Center, which says the FRC’s “real specialty is defaming gays and lesbians.” Vision America and AFA Action, the political arm of the American Family Association, together with the FRC are considered “three of the most vicious anti-LGBT hate groups in the country” by Right Wing Watch.

The event is closed to the media, and while names of the attendees have not been disclosed, many have emerged and include a who’s who of notorious right-wing evangelical leaders. They include televangelist Pat Robertson, who has a long track record of demonizing the LGBT community; Southern Baptist Convention President Ronnie Floyd; Faith and Freedom Coalition’s Ralph Reed; Penny Nance of Concerned Women for America; Bob McEwen and Tim Wildmon of the American Family Association; Kelly Shackleford of First Liberty; American Values President Gary Bauer; Family Leader President Bob Vander Plaats; and megachurch pastors Jack Graham and Ed Young.

Meanwhile, Trump earlier this month just a few days prior to the Orlando tragedy spoke at the Road to the Majority summit in Washington, which was attended by some of these same groups that fight against LGBT rights. During the event Trump said, “I’m with you 100 percent” and pledged to protect attacks on “marriage and family,” supporting “religious freedom.”

Prior to Orlando, Trump has said if elected president he would “strongly consider” appointing justices who would overturn the Supreme Court’s decision to legalize same-gender marriage, and he supports laws to allow religious exemptions for anti-gay individuals and businesses that don’t want to provide services to LGBT people.

In a poll conducted last month by Whitman Insight Strategies of LGBT Likely Voters, 84 percent, more than 4 in 5, said they would vote for Hillary Clinton, while only 16 percent would support Trump. And in a May Gallup poll of those who identify as LGBT, only 18 percent said they view Trump as favorable.

“[Trump] is no friend to the LGBT community. He is no friend,” said Human Rights Campaign (HRC) President Chad Griffin on CNN last week.

In response to a tweet from Trump saying, “Thank you to the LGBT community! I will fight for you while Hillary brings in more people that will threaten your freedoms and beliefs,”Griffin later tweeted: “Your pandering is as transparent as your bigotry. You stand against all we’ve fought for & are still fighting for.”

Your pandering is as transparent as your bigotry. You stand against all we've fought for & are still fighting for. https://t.co/JQtc4ITxMU