Gay Pride parades across the country this weekend took on additional meaning this year following the Orlando massacre, the designation of the first national monument to gay rights and the one-year anniversary of marriage equality. 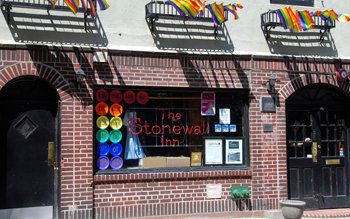 Sunday was exactly two weeks since the Pulse nightclub shooting where 49 people lost their lives and another 53 were injured. Throughout the country, the typically festive parades led off with tributes to the Orlando victims. In New York, the owner of Pulse, Barbara Poma, and the club’s manager, Neema Bahrami, rode the lead float and read out the names of those lost. In Chicago, 49 marchers lead the parade each holding a poster-sized photograph of a different Orlando victim, with the words, “Never forget.”

The first Gay Pride March, which took place in New York City in 1970, grew out of violence the prior year when police raided the Stonewall Inn, a gay bar in the city’s Greenwich Village neighborhood and spurred violent demonstrations by members of the gay community that became known as the Stonewall Riots. The event is considered the catalyst for the start of the LGBT rights movement.

On Friday, President Barack Obama announced he was designating the Stonewall Inn as a national monument, the first to honor gay rights.

“Raids like these were nothing new, but this time the patrons had had enough,” Obama said in the video. “So they stood up and spoke out. The riots became protests. The protests became a movement. The movement ultimately became an integral part of America.”

The national monument will include the bar itself, as well as Christopher Park located across the street, and the streets near the bar where the riots took place.

“Stonewall will be our first national monument to tell the story of the struggle for LGBT rights,” Obama said in a YouTube video released by the White House. “I believe our national parks should reflect the full story of our country the richness and diversity and uniquely American spirit that has always defined us, that we are stronger together, that out of many, we are one.”

Just prior to the start of New York City parade, New York Gov. Andrew M. Cuomo announced that the Stonewall Inn would be designated as a New York State Historic Site as well. He also said New York would erect a monument in honor of all victims of hate and intolerance, including those killed in Orlando.

Sunday’s pride parades also came one year to the day that marriage equality was declared the law of the land by the U.S. Supreme Court.

Presumptive Democratic presidential nominee Hillary Clinton, who made a surprise visit to march in the New York parade, tweeted on Sunday: “One year ago, love triumphed in our highest court. Yet LGBT Americans still face too many barriers. Let’s keep marching until they don’t. -H”

One year ago, love triumphed in our highest court. Yet LGBT Americans still face too many barriers. Let's keep marching until they don't. -H