For more than half a century, Westover Air Reserve Base in Chicopee and Barnes Air National Guard Base in Westfield have straddled the Pioneer Valley and affected western Massachusetts residents in ways ranging from patriotic pride to weekly paychecks.

For many who live in the shadow of these gated bases, the only reminders of their presence are the huge transport planes that seemingly strain to take flight and the occasional anti-war protest.

But the bases have given western Massachusetts a front-row seat on some of the nation’s biggest military operations, from World War I to the present.

And they have had a significant impact on the area’s economy.

“Those two bases have had major effects on communities in the entire region,” according to Timothy Brennan, executive director of the Pioneer Valley Planning Commission. “They have brought thousands of jobs and hundreds of millions of dollars to the region.”

First and foremost, each base has played a part in the military history of the nation. 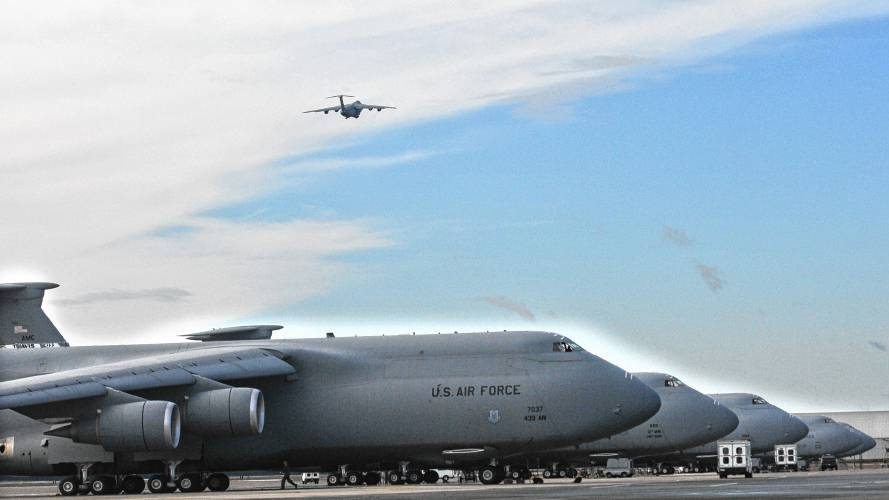 At Barnes, upwards of 20,000 men were encamped in tents as the base served as a key embarkation point for World War I.

Westover served as a bomber training base and port of embarkation and debarkation during World War II. The Chicopee base was vital in transporting freight and passengers to forces in Korea in the early 50s; and casualties from the war were brought back to Westover Hospital, since closed.

During the Cuban Missile Crisis in 1962, film from a U-2 spy plane depicting Russian missiles in Cuba was developed at Westover, a high-security Strategic Air Command Base.

Beyond serving their military purposes, Barnes and Westover also have fueled the local economy. And they serve as general flight centers.

The relationship between the two bases and the region has not been entirely rosy, however.

As Brennan said, “It’s true that the noise from these bases can be disruptive to people, and they do have a pretty unhappy legacy of not having sound environmental policies, but we’re looking for ways to address those issues.”

Brennan himself remembers when he was a graduate student at the University of Massachusetts in the 1970s, being awakened by mammoth low-flying B-52 bombers, then based at Westover.

“It was a very memorable experience at that time, but after awhile we got used to the planes and learned to live with the noise,” said Brennan.

Birth of the bases

Indeed, Valley residents have had several decades to get used to the pros and cons of rubbing shoulders with members of the military establishment in their backyard.

The story of how these two bases ended up in western Massachusetts is part politics, part persistence, part logistics.

The relative proximity to Europe was a key reason Westover was carved from the tobacco-growing plains in Chicopee. The short distance to Europe saved time and fuel.

“The military needed to have staging bases, and this is one of the closest areas to Europe,” said Staff Sgt. Sean Godley, historian for the 439th Airlift Wing at Westover. Locally, Anthony Stonina, then a Chicopee mayor, lobbied for more than 15 years to bring a base to his city, and ultimately succeeded.

Westover, who was 55, was one of only two generals to die in the line of duty since the Civil War. He is revered as a pioneer of modern military aviation, who pushed for a modern and well-equipped air force upon which the nation’s defense could rely.

Barnes’ history, while perhaps not as colorful as Westover’s, also dates to the earlier part of this century.

In the early-1920s, Westfield decided to modernize and felt the city had a future with aviation. Resident Vincent Barnes donated land for an airfield in 1923, and 100 businessmen, students and members of service organizations cleared brush.

The creation of an Air Guard base did not happen until more than 20 years later. In April 1946, 25 area pilots who had served in Europe and the Pacific during World War II, returned from the war feeling that New England needed an air defense, according to Staff Sgt. Tracy Oleksak, historian for the 104th Fighter Wing.

The pilot group, known as the 131st Fighter Squadron, held its first meeting at the Holyoke Gas and Electric building, and six months later, Barnes Airport was selected as a base for 25 P-47 Thunderbolt fighters.

A part of history

While Westover activity has diminished since war-time days, it has been a key link in many global military operations.

According to Air Force documents, nearly 277,000 flights by C-47s and C-54s were flown to Berlin during the 1948 airlift, bringing approximately one ton of medicine, clothing, supplies and food for each Berlin resident.

Area schoolchildren provided candy, which was dropped from the planes with handkerchief parachutes to German children. Operation Little Vittles, as it was called, dropped 10 tons of candy during the airlift.

Westover served as the headquarters of the Military Airlift Command through 1955, and then as a major base of operations for the Strategic Air Command until 1974.

From Westover, B-52 bombers were sent to Vietnam for bombing missions, while anti-war activists protested daily at Westover’s main gate.

In 1970, President Richard Nixon ordered the deactivation of the 8th Air Force stationed at the base. The 99th Bomb Wing continued its missions into Vietnam.

In 1974, nearly half of the 5,200-acre base was sold, and the remainder was turned over to the Air Force Reserve. Westover has gone from having more than 11,000 people on base to approximately 1,000 full-time personnel today, Godley said.

Today, Westover is the largest Air Reserve base in the country, with 1,200 personnel Monday through Friday and double that number on weekends. Its runway, at more than 2 miles, is one of the longest runways east of the Mississippi.

The base was last activated in 1990 to provide airlift support during Operation Desert Shield/Storm.

Just prior to that call-up, reservists from the 439th provided support in Operation Just Cause in Panama.

Since 1990, Westover has played an active role in other world events, including Operation Restore Hope in Somalia and assisting in relief efforts after Hurricane Mitch in Central America.

Just over the river at Barnes Municipal Airport in Westfield is stationed the 104th Fighter Wing of the Massachusetts National Guard.

While the 104th was not called to duty in either Korea or Vietnam, the unit was called by President John F. Kennedy to assist with fighter support when the Soviet Union moved to cut off allied acccess to Berlin in 1961. That was the first time the unit was activated, and nearly 700 guardsmen were deployed to Phalsbourg, France, where they spent nearly a year, Oleksak said.

The unit had used jets in the past, but the F-100s were incredibly loud airplanes. Over the next eight years, until 1979, the aircraft caused a turbulent relationship between the base and the community – to the point where neighbors filed a lawsuit against the Air Guard.

“The aircraft requires so much power, making it very noisy. … That was the price for the sound of freedom,” said Senior Master Sgt. Thomas Sanville, who has served as a jet engine mechanic for the 104th since 1960.

The lawsuit was dropped in 1979, Oleksak said, when the unit received its current fighter, the A-10 Thunderbolt II, a much quieter and cleaner ship.

Lt. Col. L. Scott Rice, of Southampton, is an A-10 pilot who has served in the last two activations. He said he has seen how the relationship between the base and the community has changed over the past decade to a more positive one than existed during the era of the noisy F-100s.

He noted that during the 1960s and 70s, the base was rather secretive due to the Cold War and residents were not comfortable with the unit in their backyards. “They didn’t know what we were doing.”

“When the A-10s came in, that eliminated the noise,” he said. “Then in the late ’80s and ’90s the unit took action to become more involved in the community, and since then the relationship between the Guard and the community has grown by leaps and bounds.”

To some degree, the same has held true at Westover, which has worked to smooth relations with communities that lie in the flight path of the huge gray transport planes.

“We’ve had quite a history of noise complaints, but we have done a lot of things to mitigate that noise,” said Gordon A. Newell, Westover’s chief public affairs officer.

Newell said aircraft practicing maneuvers will often travel to other bases to alleviate noise over the region. Additionally, he said, aircraft at times will divert operations when requested to do so by local organizations.

“We got a call recently from Mount Holyoke Summer Theatre asking if we could do something about flying overhead,” Newell said. “We asked them the date and time of their event, and our aircraft took off in a different direction to accommodate them.”

Newell said area colleges usually provide Westover with their graduation schedules, and the base diverts operations during those times. “We try as hard as we can to accommodate people,” he said.

In addition, military, civilian and environmental officials who make up the Westover Restoration Advisory Board, formed in the early 90s, studies pollution and noise issues on an ongoing basis.

On the bright side, the bases, combined, pump millions into the local economy.

“The bases have absolutely had profound effects on the landscape of the region, the economy and transportation,” said Brennan, of the PVPC. “Both are multi-dimentional facilities as transportation and military facilities … and serve as strong economic engines for the region as a whole.”

At Barnes, the base has grown to an installation with $435 million in aircraft, technology and physical structures and is staffed by nearly 1,000 guardsmen and civilian employees, Oleksak said.

At Westover, Newell said, more than $131 million was pumped into the region in 1998 in terms of goods, services and purchases. That dollar commitment is expected to continue into the next millennium, he said.

In addition to general aviation flights, there was talk for awhile of luring major commercial airlines to Westover, said Michael Bolton, director of civilian aviation at Westover. However, he said, the military imposes a curfew on the airport and does not allow flights between 11 p.m. and 7 a.m.

“The airlines can’t take that chance … they can have weather or maintenance delays and not be able to use the airport during the curfew hours,” he said. “With Bradley Field so close, Westover is just not attractive to the major airlines.”